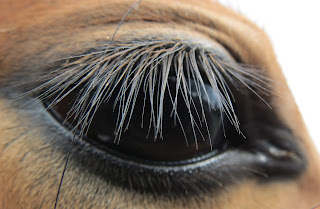 
I notice themes.
I notice details in life.
It is my 'flaw' or my 'gift', depending on perspective.

The theme that is currently running through my life involves training methods and trainers who use them.
Lately, when I put on my Equine Behavior Modification Specialist hat and go out in the world to work with the horses I've been called out to see I see that they all have similar unwanted behavior issues.

I like to determine the type of work that has been done up to the point of my meeting the horse and also in some cases who has done the work.

It is easy for me to locate the moment(s) of miscommunication when I know who put the training on the horse.

In my general location the training pool is small compared to off island locations.

Many of the local trainers are young and most follow one or two more senior trainers from off island.

The methods they use are called 'Natural Horsemanship'... but to the horses that are having trouble the horse-man-ship is anything BUT natural.

The methods being used which are based on 'body language' and 'games' are inadvertently pushing all of the self survival defenses in the  non-compliant intelligent individuals among the equine species.

The methods will work and show success with compliant members of the herd. Given the fact that most domestic pleasure and working horses have been dumbed down purposefully to be more compliant this puts the odds in the trainers' favor.

However, when presented with horses from the range as an example or from 'feral' herds or mustangs who have been rounded up and sold off these 'methods' fall apart and the horses ultimately become labelled as 'untrainable'.

The horse may end up being passed from trainer to trainer becoming worse as he passes through hands.

When I watch videos of the trainers working with the horses and I hear the words that go along with the videos...they don't match.

What I see are predators. Dogs. Skulking stick carrying (in some cases) wolves, cougars, predators.

What I also see is the 'mimicry' of motions that would have been used by early indigenous horsemen and women.....Shamans.

I see the movements and the 'body language' as uneducated imitations of the energy movements and shape shifting and healing used by Shamans..the Medicine People and those who knew their ways.

If you happened upon an authentic natural horse person, a person who truly is using the language of the horse, you would see movements of body, arms and hands.

It is the 'unseen' that confuses and has confused the modern day 'natural horse man'.

The 'unseen' movement of energy.
The 'unheard' telepathic communication.
The 'unknown' understanding between species as thought forms rise into consciousness.
The 'unfelt' connection.

imagine watching a dressage master riding his horse in a collected manner and not having the eye or experience to note that the master had no contact on the horses mouth or sides..

How would you replicate this without the wisdom and knowledge and experience that goes along with it?

Lunging harnesses that 'push, pull and make avoidance impossible' are used to create the 'form' as was seen when the master rode his horse.

Bits with more leverage are introduced.

Bridles with straps to hold mouths closed are implemented.

All of these are based on a 'flawed perspective' of the seen because there was no understanding of the unseen.

In the case of Natural Horsemanship many of the theories put in place make sense to 'man' because we are predators thinking and working form the 'flawed perspective of the predator'.
Horses are sentient prey animals with an entirely different perspective.

Recently I worked with a client who had studied under two different NH trainers who both use a similar method.

Her horse had become defensive in quite an extreme manner.
This came as quite a surprise to the owner and trainers alike since he'd been a very 'compliant' horse and was learning quickly.
Physical ailments were ruled out by veterinarians as well as alternative health professionals.

As is my usual practice I 'felt' the horse from a distance, observed his surroundings and the other horses both on and off the immediate property....and then asked the owner to show me what she normally does with her horse.

She had learned several 'games' to play with the horse to warm it up.

As she began to show me the first 'game' I had her talk me through the process, telling me how and why she was doing what she was doing...all the while watching and 'feeling' the reaction of the horse.

What I saw and felt was a horse who immediately retreated into the shell of his hide, stood stock still (except for his eyes and ears) as long as he could bear it.

His fear and anxiety was palpable (to me), and was clearly visible (to me) but went unnoticed by his owner.

His owner saw something quite different.

She saw him as being calm and accepting.....and well on his way to being 'desensitized'....which was the goal.


As the game progressed the horse began to fidget.
His eyes widened.
His ears became animated.

...and then 'he lost it' and scooted as far away as the lead would allow.

The perspective of 'the game' she had been 'playing' with him was to touch him on his body and anywhere he flinched she was to circle with her fingertips until he stopped flinching. This was intended to desensitize him..as was taught to her.

The flawed perspective is this....
When a horse flinches under touch it means there is energy sitting in that area that wants to move. By circling in the area you inadvertently increase the energy to that area.
If you have been moving around the horse with motions and  movements relegated by him to be that of a predator (ie: slow and methodical and with focus) he will be 'on the muscle' and prepared to move if necessary.

Come to the horse in a good way.
Have no fear.... this you cannot fake.
Have it in your mind and heart to ease his fears.
Move purposefully and with integrity.
Come from the heart and when you touch him remember to breathe deeply, quietly and rhythmically.
If he flinches under your hand, hold it lightly and calmly on anywhere other than his topline including his neck.
Use slow circles down his neck, withers, along his back to his tail head.
All other areas including the poll, brow and face simply hold your hands still and breathe deeply.
From time to time use a sweeping gesture toward the ground to move the energy.

The horses' perspective toward you will change instantly.

You'll now be coming from a place in his world...his way...
This is the way the 'old people' learned how to be with horse.
The old people, the medicine people, the Shamans.

'The Games' that many natural horsemanship theories are based on are replications of what was seen and not understood at the energetic level where horse resides.
The sticks, the strings, the gimmicks are all necessary in order to get the result (or so they believe) that simple movement of energy will get.

Think back to the dressage horse......
Let's get back to natural.

With a little more understanding and a few simple shifts in perspective the whole world of horse training will shape shift into something more natural to the horse.